Kilrush Drama Group will perform ‘The Lonesome West’ by Martin McDonagh in St. Brigid’s Hall, Carnew on Sunday 22nd and Monday 23rd April before their All Ireland performance in Shercock, Co. Cavan on Thursday 26th April. 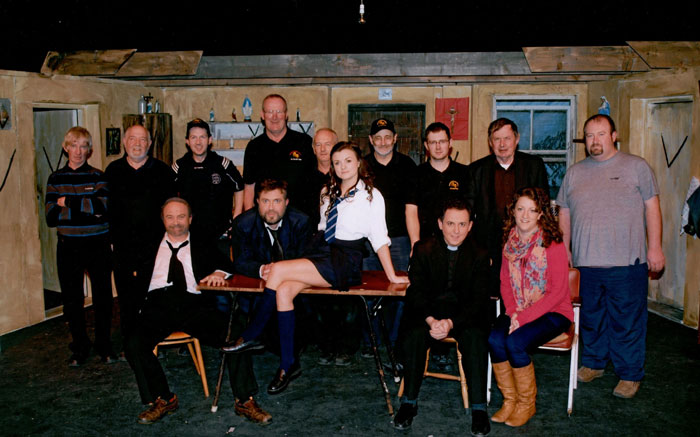 Symposis of the Play: Part of the Leenane Triology by Martin McDonagh, The Lonesome West tells of the frustration of a young alcoholic priest to reconcile two middle aged, feuding brothers, and to stop them killing each other. He also has to ward off the romantic advances of the young Girleen, in a parish he calls the crime capital of Europe. Martin McDonagh’s ability to mix hilarious comedy with violence and dark moods makes him one of today’s most popular playwrights.

This website uses cookies to improve your experience while you navigate through the website. Out of these, the cookies that are categorized as necessary are stored on your browser as they are essential for the working of basic functionalities of the website. We also use third-party cookies that help us analyze and understand how you use this website. These cookies will be stored in your browser only with your consent. You also have the option to opt-out of these cookies. But opting out of some of these cookies may affect your browsing experience.
Necessary Always Enabled
Necessary cookies are absolutely essential for the website to function properly. This category only includes cookies that ensures basic functionalities and security features of the website. These cookies do not store any personal information.
Non-necessary
Any cookies that may not be particularly necessary for the website to function and is used specifically to collect user personal data via analytics, ads, other embedded contents are termed as non-necessary cookies. It is mandatory to procure user consent prior to running these cookies on your website.
SAVE & ACCEPT